Each year, as I watch the traditional Anzac day clash, I am often hit by an overwhelming sense of pointlessness in my chosen passion. There isn’t a greater example of why Sport really isn’t that important in the scheme of things than hosting a game on the day we remember fallen soldiers. As someone who consumes a lot of Sport, is employed in the industry and (as of this post) has started a blog exploring the vagaries of data in sport, I often battle with this feeling.

On this same weekend, I read a great article in the NY Times, entitled What Happens When Baseball-Stats Nerds Run a Pro Team? This is a fascinating exploration into the world of Sabermetrics in America and in particular, when that starts to become to main focus of an organisation. While I firmly believe that using data to assist in various decisions in the sporting context is crucial to making, on average, the best decisions, it was really interesting to read the challenges faced when variables outside of the measured data set begin to influence the outcomes of their decisions.

The take home message form the article came in the idea that regardless of what the data point to, the most important part of the formula is the story. Players didn’t trust the “nerds” telling them that on, on average, they should throw pitch X over pitch Y under Z conditions. The players needed a story to focus on.

In the season's final weeks, we changed course, focusing less on data and more on story. When we brought our left fielder in to reinforce our infield against a batter who hit only ground balls, we sold it as fun and adventurous. When we started using our closer in tight spots as early as the fifth inning — instead of the ninth, as every other team does — we kept our message as simple as could be: The game is on the line, so let's take the bad pitcher out and put the good one in.

Towards to end of the article, they discuss the fact that a newly acquired pitcher, Sean Conroy, came out as the first openly gay Pro baseball player. In particular, they noted how they needed to learn from Controy about telling his story in the right way.

Conroy did what we failed to do. He didn't make his story seem scary, and he didn't make it about himself. He made it about the team. If we'd started our season thinking about the story we were telling, maybe we would have made history

This article to me showed me why sport can be important in society. Firstly, the importance of Sport in my life is because of the great stories that exist. From the sadness of the death of our sports stars, to exploring issues in the broader societal context such as gender inequality or racism, sport gives us an important outlet.

These stories transcend sport and provide, in my opinion, important discussions that are generally avoided. Even within the realm of the contest however, some of my best memories are watching unforgettable sporting moments such as amazing finale to the Australian Netball Championship, my beloved Hawthorn winning three grand finals in a row or John Aloisi’s penalty to get Australia into the World Cup.

These are all stories that resonate and stick with me for a long time. In this blog, I’m hoping to explore my passion for such stories and use data to help explore these stories from a different perspective. If you go to my About Me page, you can see many of my inspirations for this blog, but a huge one for my is Nate Silvers FiveThiryEight and some of the fantastic infographics on this site. 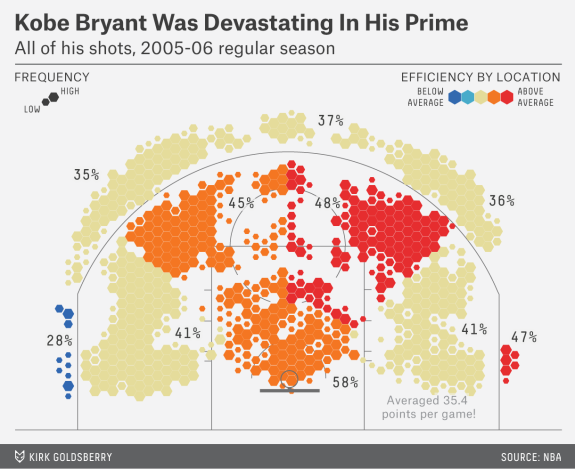 An infographic around Kobe Bryants shooting efficiency. Image from FiveThityEight.com

I love the way the authors of this blog are able to utilise data to help tell a story. It’s not for everyone (mostly stubborn old players) but I think it certainly enhances some of the great story lines that exist. With this blog, I’m hoping to use data, and learn more about data science, to explore stories that interest me. In particular, I hope one day to expand this blog into a broader exploration of data science stories in Australia, but for now, I’ll start with Sport and see how I go!